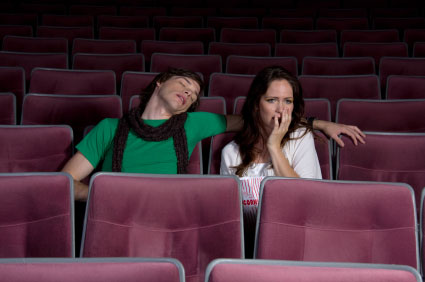 Hey dude, don’t worry, you’re not just the only one. Every guy has to reserve a night of the week for a “date night” with the lady friend. Yeah, we know, it’s the worst; and yes, we’d all rather be doing manly things like watching sports with the guys. But, it’s just one of those harsh realities of life. Date nights have to happen in order to keep peace on earth. We all know the easiest way out is to just head down to the movies to catch the latest chick flick. But, think about how much money you’re spending every week on something that is just absolutely zero fun. These dates already crush your man hood week in and week out, so don’t let them crush your wallet as well. Avoid this weekly routine of heading to the movies; and instead, put that money aside for something you planned on in the future, and NO I’m not talking about that one word that starts with a “c” and ends with “hildren”. I was thinking more along the lines of…oh, let’s just say, your future man-cave, for instance. So, by giving up that chick flick every week, you could end up with more than $95,000 in just 30 years! *(Investing $75 per month at 8% annualize return). Guess who’s going to be resting easy tonight while dreaming big about their future?..(cough, cough man-cave). The answer is…you! Yes, you, young man. You’re going to sleep well tonight.