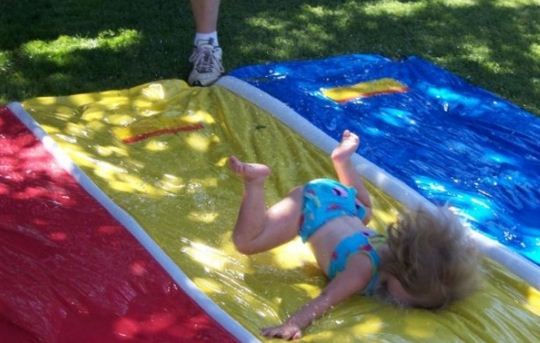 Back in the day, every single summer I would always hear people talking about what a great time they had over the weekend at the water park with their families; and how it was such a fun way to stay cool during the hot summer days. After saying how much fun it was they would then complain about the $25 it costs for admission along with the $10 hotdog and soda combo they bought for lunch. Then it comes without saying that the closest water park near us was over two hours away, so you know their parents weren’t too thrilled paying for gas for that long day trip. All those expenses add up quickly, and a trip to the water park could easily cost around $250 for the day. So, after hearing this I naturally would ask myself, “Why are these people so stupid?’ ‘Has all this sun just fried their brains?” But, then I realized they just weren’t as lucky as me, and they don’t really know the truth about my dad and how he is a downright god when it came to building our very own waterworks fun in our backyard every summer. I feel kind of bad that not everyone got the same summer experience that my siblings and I got each summer. He came up with too many games, rides, and activities over the years to remember them all; but there were three that I’ll never forget. With the first being the massive slip ‘n slide made out of a bunch of extra large trash bags duct taped together. Then there was the intense water gun fights between the siblings, where I would just downright dominate my brothers and sister with my Super Soaker 3500 and my water balloon grenades. Then lastly there was my […]
Do you like it?
Read more 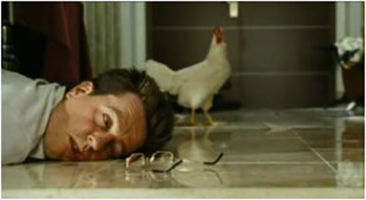 How are you feeling this morning? Horrible, right? Too many beers and you really didn’t need all those shots on top of everything. Yeah I’m right there with you this morning. I don’t want to make you feel any worse, but go take a look in your wallet. I’ll wait. What happened?!? You had like $100 when you went out and you didn’t think you spent that much, right? Yeah I’m right there with you, again. I shouldn’t have bought that round of shots for everyone; and it looks like I love to drop $100 just to feel horrible today. I should have just spent $50 and I would feel 100 times better and actually have a little cash left in my pocket. If I could save that $50 every time I go out, I could save like a $1000 a month (haha not really, but I legitimately could save around $200 a month). Then, if I used Dollar Investment Club to invest that $200 every month, I could have $118,615.01 in 20 years! That saves me a lot of money and even more headaches. Now, if you’d excuse me, I need to go lay down before something horrible happens. *Numbers assume an annualized return of 8%.
Do you like it?
Read more 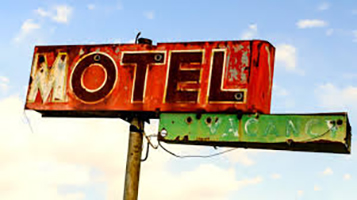 The nice summer weather is making people want to take time off of work to enjoy the sun. So, it’s no surprise that people are taking vacations now. Vacations are expensive though, did you know the average price of a trip to the Caribbean for two people costs around $4,000! If you feel like you have to take a vacation then why not spend as little as possible, let’s say like $500. I know you are thinking, “Where the hell can I go for $500?” Well, I have an answer, the Crusty Cottage Motel. It has all the amenities you could want in a vacation, great rooms with stained sheets, rusty bathroom fixtures, sandpaper towels, and a huge 13” black and white TV. On top of the great rooms there is so much else to do there. Their pool is great, with green algae water that is good for your skin and a slide that is floating around in the pool, it’s awesome! Oh, and how could I forget the petting zoo they have there; they have snakes, cockroaches, spiders, rats, and even possums. If you have kids they will love playing with the animals. Last but not least, you have to eat at the Crusty Kitchen; their SPAM, mayonnaise, and cottage cheese casserole is outstanding. Needless to say this will be the best vacation you have ever had! If you don’t think this is the vacation for you then why not invest with Dollar Investment Club, and save up enough money for ten Caribbean vacations.
Do you like it?
Read more 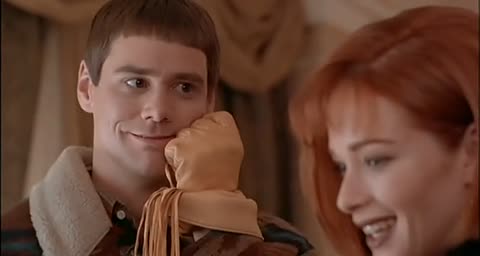 Lloyd: “Not good, as in 1 in 100?” Mary: “I’d say more like 1 in a million” Lloyd: “So you’re saying there’s a chance?’ ‘Yeahhhh!” In reality, the chances of you winning the lottery is a mere 1 in 175 million. So, while yes, you can argue there is a chance…is there really? Millions of people, including Lloyd, believe they will be that one lucky winner. Really? Come on. GET A GRIP PEOPLE! You are more likely to have picked a perfect NCAA bracket, become an astronaut, find a four-leaf clover, or (unfortunately) be murdered than win last weekend’s Powerball payout. Now, I know we all want to believe that we can beat the odds; and trust me I have done it too. I’ll be that one girl sitting at the bar, counting out dollar bills to play just one game of quick draw. You know, “Just so I can be the one to buy the next round.” So, you sit patiently, pretending to engage in meaningless bar talk while you’re really staring at that small little TV out of the corner of your eye. The countdown begins and then “Shhhh quick draw is on!”…Um If I’m not mistaken I’m pretty sure there’s no sound when the numbers start to appear on the screen. But, for that one minute it’s as if your world is about to end if you don’t get those five stupid numbers to pop up on that screen. The first time you win, you’re always saying, “Why not? I’m on fire right now. I just won 100 pennies, just think of the endless possibilities.” But, as soon as you start winning, you start losing even more, until you lose just about everything. Then, after a couple of drinks, you get to that point during your night […]
Do you like it?
Read more 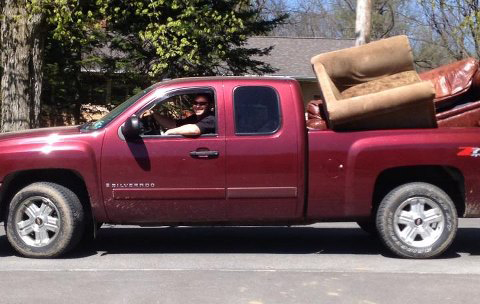 In the last couple of days I have been going through the overwhelming process of moving. While excitement and anticipation took over my body, I was also very anxious about how I was going to be able to afford my new apartment that not only needed to be furnished but also was over 120 miles away. As young adults, it is expected that we will move from one apartment to another until we move into that white picket fence house that we will forever call home (YIKES!). So, in order to prepare for your next move, here are a couple helpful hints. Do not pay over $100 to rent a moving truck. Instead, find a friend or even a friend of a friend who owns a pick-up truck. Chances are they have a little (if not a lot) of redneck blood in them and LIVE for this type of stuff. This also means that they are most likely men, so they can do all the heavy lifting while you just sit back and direct traffic. Furnishing your apartment does not mean you need to go to IKEA and buy everything in sight. Go to garage sales, pick up old furniture and then make it your own. A can of paint can go a long way and can help turn that dirty, old, should be on the side of the road dresser, into a work of art. Before you go and buy brand new dishes, pots, and pans go shopping in your parent’s house. Most likely, you have been living there since you graduated college, unable to get a job like most of America’s young adults, so you know what dishes get used within the household and which ones just collect dust. Take out those dirty dishes and immediately put them […]
Do you like it?
Read more
Prev page
123456789101112131415161718192021
Next page